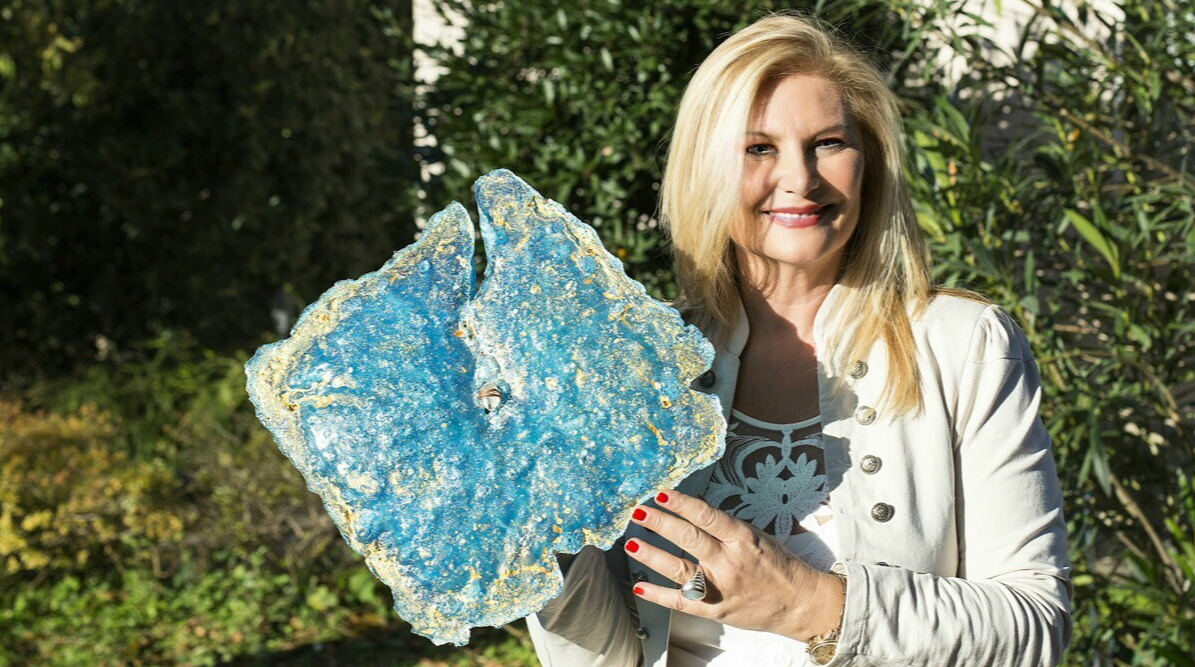 These are valuable talismanic Art works, mostly created with epoxy resin, semi-precious stones, Swarowski, diamond dust, pigments and gold and silver leaf, in which the luminous energy that is infused through a direct connection with Light Entities, so that I allow my soul mind and hands to become a channel that make them powerful energy transformers that bring health, luck, abundance to people, to their environments and offices.

Each and everyone is a unique piece and cannot be repeted the same, as everyone becomes a special one meant exactly the way it is to be connected with the right person.

Among them: the collection of “TavoliQuadro”, “Galactic Connections” and the series of “Star Ships”: three-dimensional works with semi-precious stones, with the power to activate specific energies which are linked to the chakras and the seven energy points of the human body.

Each piece is completely unique and cannot be replicated: each and every piece is unique to the special person who purchases. When an energy art work is purchased, this is connected to this person, as they were meant to be connected!

All works are designed to radiate an energy that has the task to heal, whilst raising the frequency of the owner and the environment in which they are exposed.
Customers who have purchased these works have said that their life has improved; that they immediately felt lighter, more stimulated, active, open and joyful!

This is what led me as an artist to want to spread my transformational art works: naming them ‘Transfomational Energy Art’ as this is the true meaning of these creative pieces of art. 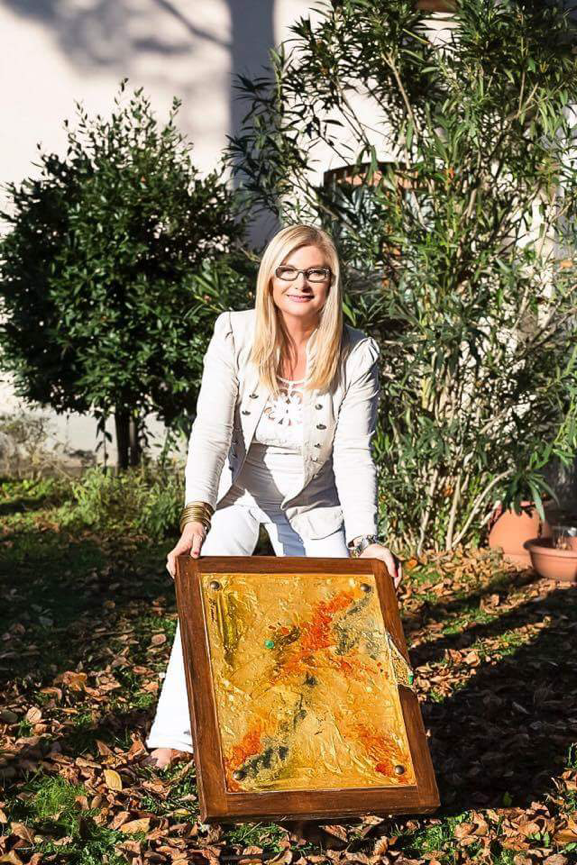 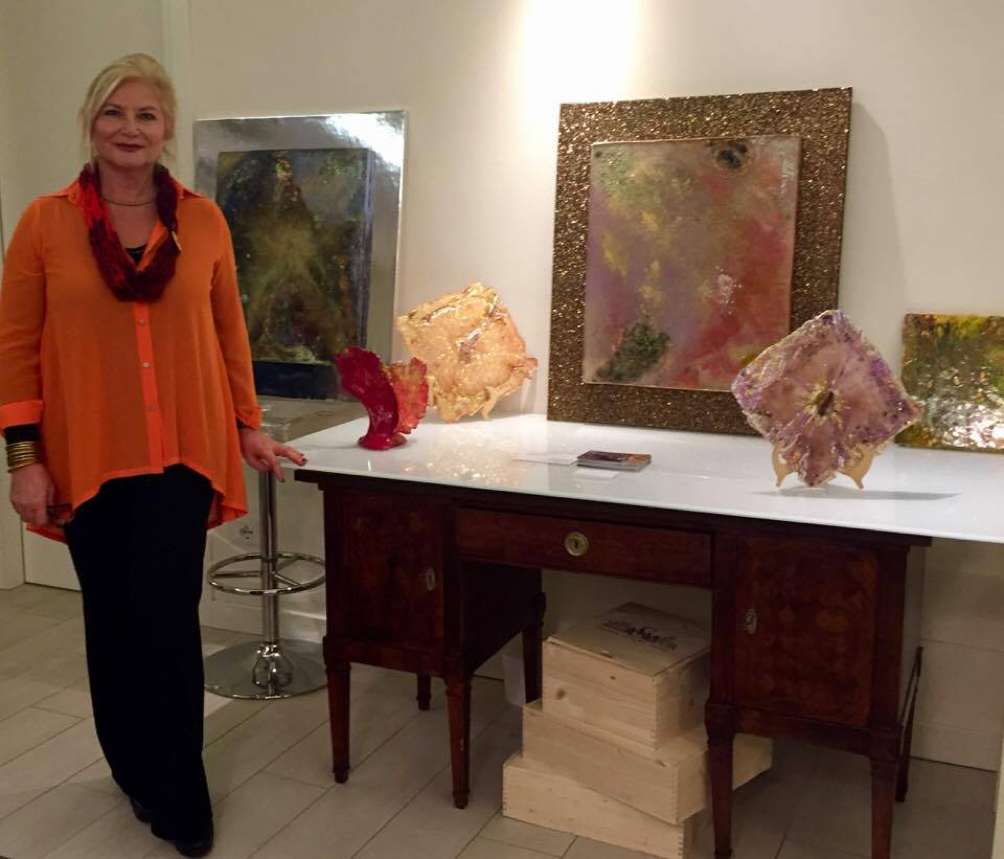 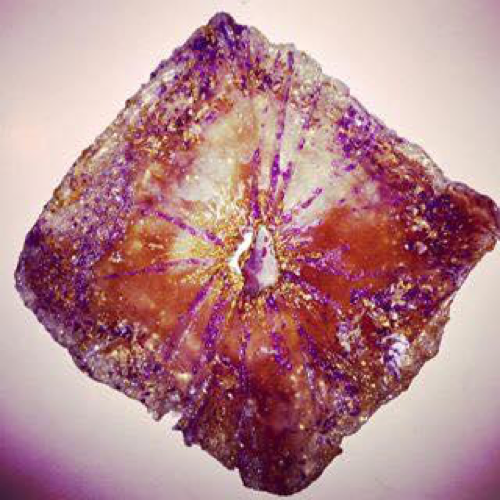 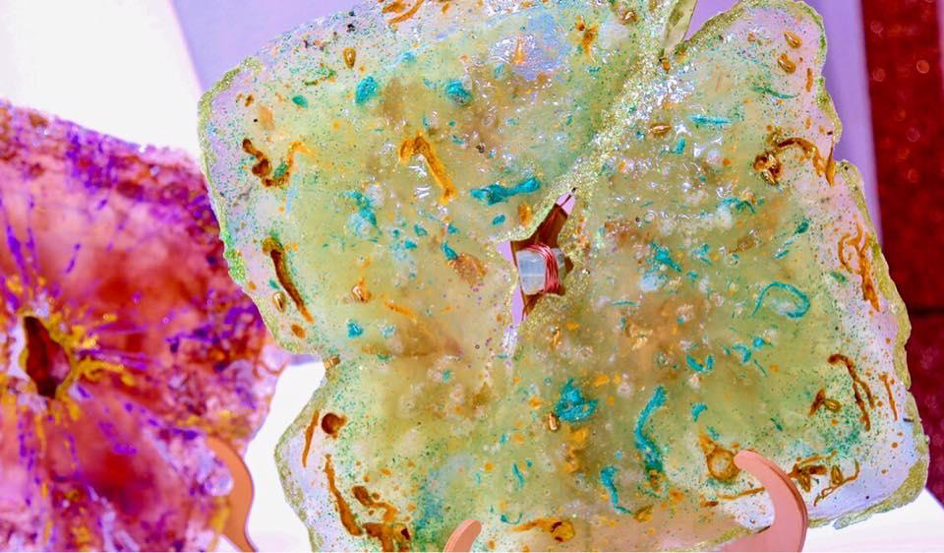 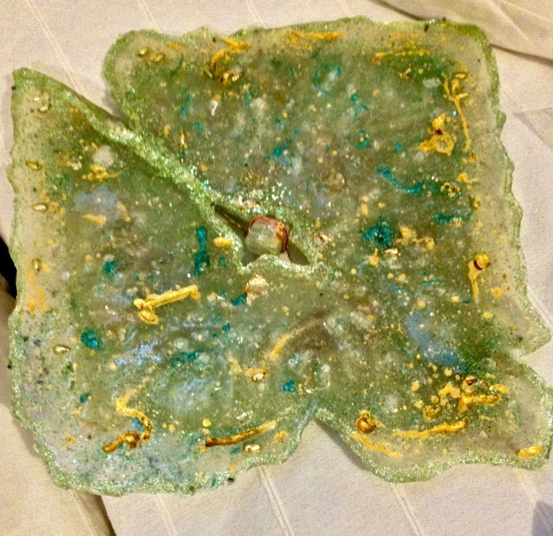 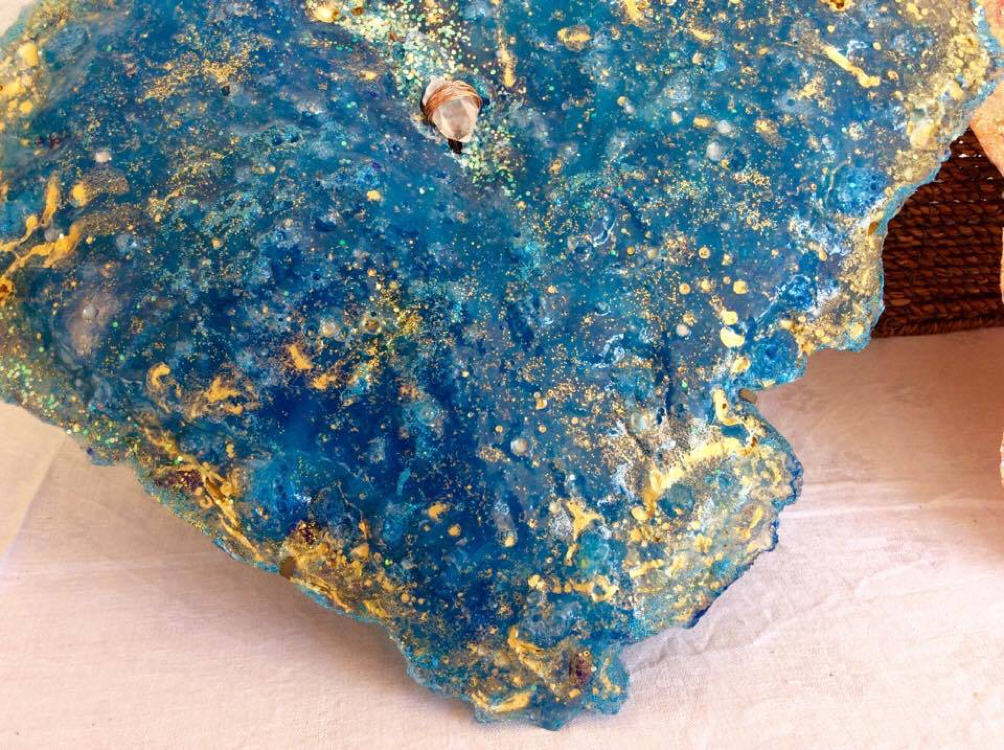 Star Ships are one amazing part of the collection of Energy Transformational Art Works inspired by High Energies and created by Marina Ferrara that connect with people’s energies associated with the their different chakras, their magnetic field and realign, enhance and allow their owners to protect, to become magnet for wellness, luck, money and good relationships, opening their hearts to love. Harmonizing ambients.

They are cast in epoxy resin and are used with mixed techniques pigments, gold and silver leaf. They are geometric structures, to scale lozenges concentric, able to connect at an energy level the person and the environment with the energies that are catalyzed by the same shape, the colors, which are also frequencies, and the central stone which is usually a semiprecious stone, catalytic core and issuer specific energies he works.

Where the hyaline quartz, surrounded by blue that fades from cobalt to midnight blue, allows to work on the crown, the 7 Chakra.

The amethyst connected with gold pigments, purple and lilac tunes to the 6 Chakra or third eye, able to broaden the vision and expand the sensitivity.

The rose quartz or jade focal points of pink or green Starship have the task of connecting the heart with warm energy, able to open it, by raising the frequency. When colo the resin and use the color and pigments, when building up Spacecraft, jobs in a state of creative relaxation, defined often been Alpha or Theta, it was even more profound in which I ‘can catalyze high cosmic frequencies, transmitting in works themselves.

It is this connection made in the creative moment that allowed these works to become a real powerful transformation and healing tool for people who have love at first sight, feeling calls from the works and wanting to bring in their own environment, which is It has been harmonized in turn.

The customers who bought these works, say that their life has improved, that they felt immediately lighter, more stimulated, active, open and joyful. This is what led me as an artist to want to spread my art transformational, calling Transfomational Art and that ‘the true meaning to my creations.

When an art work is purchased, I align this energy with the new owner, so that it touches their soul and allows the process of transformation to begin…

This is something that happened to me several years ago, which then started my commissioned works “VIP NEW BORN ART WORKS”

I will tell you the story of The Rising Star…  This is something that happened to me many years ago.

I received a very special request several years ago, from an industrialist, new father, who, without realizing it would have wanted to “crystallize” the bond of their newborn baby with their parents, and in particular with her mother, asked me to put “under resin”, almost like an insect, the piece of dried umbilical cord of their newborn baby.

Obviously, as an artist, I refused to put a piece of umbilical cord under resin, but instead I proposed to create an “ad hoc art work”  for Elisabetta.

And in the process of creation I realized that I could not have wanted to crystallize a relationship between the child and her parents, but I worked artistically and energetically for the evolution, the expansion and the realization of the newborn Elizabeth, as Unique and Special Being, for the development of her Self and of her Soul.

Seven years later, I received an email from the father, Alessandro:

“Marina Good morning! We met seven years ago at a special request. Because of your artistic ability to model with resin I commissioned the work that contained a part of the umbilical cord of our little girl, Elizabeth.

You created a very special and beautiful Art Work, Rising Star (I enclose the photo, but you certainly remember it) that straddles my desire: I wanted a work that actually would have crystallized the bond with her mother, and you realized something that would allow the ascension of my daughter, from her origins to the fullness of her maturity.

I appreciated very much your Art and work and the interpretation you gave.

Last year in July Victoria has arrived and, now as then, we would not only preserve its “cord”, but also avail ourselves of your work and also your ability to give a deeper meaning than just preserve it.

Are you willing to do this work for us a second time? Maybe with a “tabletop sculpture” so as not to repeat the idea of a picture?

I await your kind response. Thank you and good day”
– Dott. Alessandro

This is more gratitude than I could have anticipated.

And a new Energy Transformational Art Work has born:

What does this amazing story mean?

Transformational Energy Art allows harmonizing everything in your life! 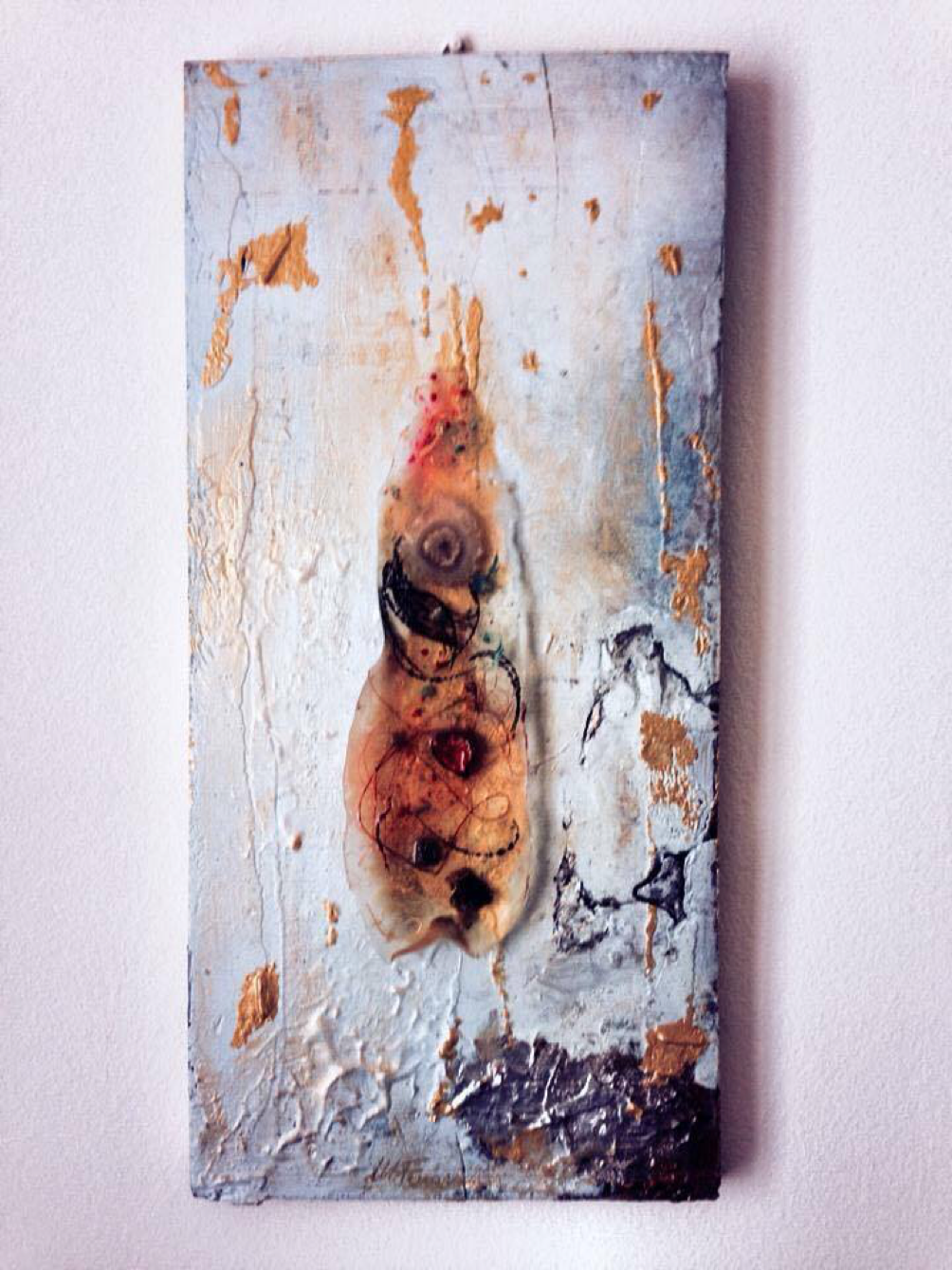 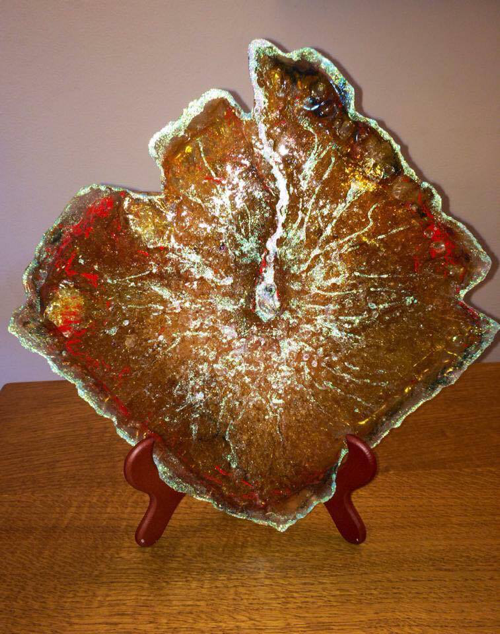 The installation is a cascade of liquid gold flowing from above and which has the power to transform the mood of the individual hidden.

It is symbolically a universal energy resource derived from nature, as well as oil and ‘the precious golden substance produced by the transformation of the Olive fruit, the plant has always been considered “sacred” and for its healing properties for its precious nutritional qualities.

The gold of the work fluid, figuratively speaking, is the wave of energy activated and recalled from the soul of man himself, which I have represented with olive branches visible in transparency in the golden waterfall nestled in blue space.

At the same time the soul is touched and transformed by this same precious energy. Anyone who knows me knows that I prefer for years for my creations epoxy.

They are designed to radiate an energy that has the task to heal, raising the frequency of the user and the environment in which they are exposed.

I presented my works in several exhibitions in Italy and also in the prestigious Art Basel in Miami. Among them: the collection of “TavoliQuadro”, “Galactic Connections” and the series of “Starships”, three-dimensional works with semi-precious stones, with the power to activate specific energies linked to the chakras, the seven energy points of the human body.

By continuing to use the site, you agree to the use of cookies. more information